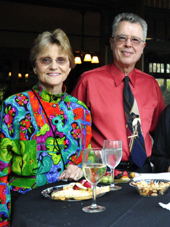 In 1974, after the worship service in our Quad Cities (Iowa) UU congregation, a member approached me with a challenge: “Tom, thus far you’ve tackled every social justice issue except mine. I’m a gay man, and I invite you to become our ally. Let’s come out of our respective closets here in this mid-western parish!” And we both did. I preached a sermon on heterosexism, and together we launched an ongoing Gay–Straight dialogue. This pivotal passage, forty-five years ago, also emboldened me to conduct gay services of union, although I wasn’t brave enough to have them occur on our church premises.

When Carolyn and I arrived in San Diego in 1978, as co-ministers, it wasn’t long before we were approached by a long-time, core member. He told us he was gay, and we said let’s talk about what are we going to do together. We started a gay-straight group at First Church, which included lesbians, gays, and straights. We used ‘gay’ as the defining word as we were not yet courageous enough to use the word, ‘lesbian’.

These transformative conversations led to the beginning of GLO (Gay Lesbian Organization) as its own distinctive entity to serve the needs of our now growing gay and lesbian community.  A gay minister who had been asked to leave his church came to us and offered to help us grow. With his help, GLO began to hold their own worship/support experience every Sunday morning before the regular service. They requested it early so they could attend the regular service. Their services were held behind closed doors and drapes, as numerous GLO members weren’t “out” either to family or work associates. Confidentiality and safety were major concerns. One of the founding members of GLO, Helen Bishop, went on to draft the continental UUA program/handbook titled The Welcoming Congregation. Another leader, Chris Hassett, co-wrote a book with Tom in 1994 entitled Friendship Chronicles: Letters between a Gay and a Straight Man.

At this time, the AIDS epidemic broke out. We ministered to the sick wherever we were asked to be. Every Thanksgiving the church held a beautiful feast for AIDS patients and their caregivers.  Additionally, First Church reached out to friends and families of AIDS patients offering a loving, supportive, and tranquil setting for memorial services and celebrations of life. Ours was known by the gay community in San Diego as “The Church.”

First Church also provided support and a safe haven for other spiritual groups dealing with sexual orientation issues. Today, it remains home to Dignity San Diego (the LGBT Catholic group) which holds its weekly worship services on our campus. And, as University Christian Church and other local congregations began their own discussions to become “affirming” or “welcoming” parishes, we, and our members, met with their lay and ministerial leadership to address spiritual and organizational concerns.

In the early ‘80s, a worship Sunday called “Wholly Family” became established as a yearly service. In these services all kinds of family groups participated, including always, a gay or lesbian family.  GLBT members have served on the Board of Trustees, have been RE leaders of children and youth of our community as Religious Education leaders; and have served since the 1980’s as ministerial and staff members.

Although “transgender” as a concept has been part of the church’s vocabulary for many years, few church members were aware of the struggle of one well-loved church family as they dealt with mom’s understanding that she was truly “he.” On a particularly meaningful “Wholly Family” Sunday in December 2001, two adults and their two children offered the entire congregation the gift of the struggles and commitment of redefining their family configuration. Their sharing gave congregants the opportunity to begin to appreciate the “otherness” of this most misunderstood aspect to “LQBTQ-ness.” They remain together as a loving family and as core leaders of First Church.

In faith, hope, and love,

Here is a supportive testimony of a current leader at First Church:

I have been a member of First Church since 1992. First Church was the first place I ever felt totally safe in a majority heterosexual setting. It is the first place my beloved, deceased partner, then wife, Bonny and I could talk about and receive acceptance of support for our relationship. Because of Reverends Carolyn and Tom, my being a lesbian in a committed relationship was accepted and honored and I could be sad, be silly, be grieving, be needy, be applauded, be comforted, be honest, be all of me.

I know I don’t speak for myself alone but for all who were the “other” during Carolyn and Tom’s 24-year-ministry—for that lesbian, gay, bisexual, transgender, or queer person who tentatively stepped foot onto First Church’s campus. These straight, but never narrow, ministers gave us a place at a table we could only dream of—the great gift of their love and of helping me and us become “a part of” after years of hiding and being “apart from.”

Together, and in their individual ministries, they found ways to help our congregation explore “otherness” and support “oneness.” Because of their pioneering and support, this large and thriving 1000-member church has welcomed first gay; then lesbian and gay; then lesbian gay and bisexual; and finally lesbian, gay, bisexual, transgender, queer, and questioning individuals and organizations. It is because of the Owen-Towles’ courageous vision and leadership that my church campus has become a safe place where all of us can share our gifts.

The Rev. Dr. Carolyn Sheets Owen-Towle is minister emerita of First Unitarian Universalist Church of San Diego, which she served with her husband, the Rev. Tom Owen-Towle, from 1978 to 2002. She was a candidate for the UUA presidency in 1993.

The Rev. Dr. Tom Owen-Towle has been a parish minister since 1967 and is the author of two dozen books on various topics of personal growth, social compassion, and spiritual depth. He has been partnered in marriage for 47 years to Carolyn Sheets Owen-Towle, and they are devoted parents of four and active grandparents of six. He is also a guitarist, a Little League coach, a budding magician and merry-maker, especially with seniors.
Posts by Carolyn and Tom Owen-Towle