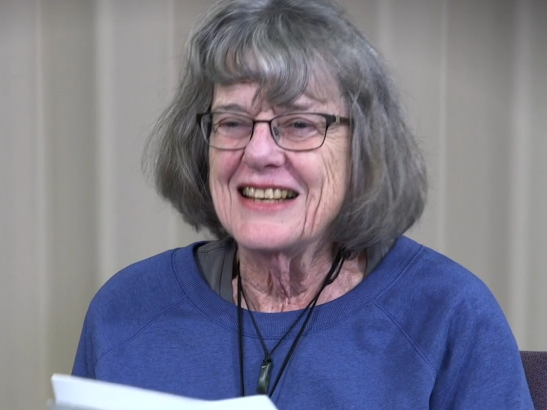 In 1987 I was invited by Bill Schulz to be part of a colloquium on “Is the Body the Primordial Sacrament?” And this was with Bill Hough and Roy Phillips, ministers also. My particular topic was, what are the theological grounds upon which we establish and defend the body, our physicality, as a basic value. How do we recognize the exploitation of the body? On what basis do we refute those who would say, “I don’t see anything wrong with pornography, child abuse, et cetera.” So, I chose to respond with what I call narrative theology and with a poem called Tribute, which was dedicated to Patricia Woodward who was my partner for several years. I encourage you all to listen with your bodies as we said at the time.

My lover’s bones lie scattered on a hillside in Mendocino County. It is a place made sacred by the pilgrimages of her friends. The sun rarely breaks through, clouds press down upon the Chaparral, caress the pounding sea. Delicate gray-green plants struggle to survive. Tiny flowers grace her grave, their colors changing with the season. Two narcissus planted at the scattering, rose the next spring but never bloomed. Only wild things can flourish in such a place. I return when I can. My home is on another coast. Alone or with a companion, I climb the long ridge from the campground. The hills roll out in unison endlessly to the ocean. I come here to remember eternity, that death is as natural as the curve of ocean against land and as cold.

The skeleton of a small animal catches my eye. I bend down to extricate it from the sandy soil. Cradled in my palm, I carry it toward memory. Carry it gently as if it mattered if the bones shattered. Each time, anxious that I may no longer recognize the spot, that the ground will shift, I am relieved when my feet pick out the hollow in the final rise. I see her ashes, fraying lace along the gray-green bodice of the hill and I am thankful. In my lifetime I could not bear to come and find her broken body missing. I long to touch these remnants of her substance. I stoop and place the fine mammalian frame amidst her bones. I finger a piece of ash and breathe out sighing.

I fondle this remnant between fore fingers and thumb, crouched down against the wind. I hug my arms around my knees and remember our beginnings. It was on Roger and Jane’s sheepskin rug before the fire. I was drawn, a cluster of iron filings to her vulnerability and her strength. Five foot two, she could fill a room with pathos or with laughter. She would carry on, her fists splitting the air, the crowd in stitches, raising her power. She helped us to laugh at ourselves. No aspect of our humanity was verboten or, the protagonist in a psychodrama, she would reveal her injuries, her face creased by misery and loss. I could not leave her alone. I gave her my telephone number. Two days later she called. Then, house sitting in the Berkeley Hills, it all began. We faced each other chatting on the couch. We were specific about our lives, our dreams. She kept asking if she should leave. I kept asking her to stay. She stayed. There is something essentially natural about coming to love a woman and warm.

Sappho had pulled at my bridal for years. Here unchecked, safe with my own sex, I felt released to give. Trembling fingers, membranes, throat poured out auras, juices, sound. She was the competent one. I responded in kind. We were wild, joyful, and then, so that she would not be left, she ran. It was all there. I should have known but love, bit between the teeth, cannot be recalled. I would not let her go. I would not harm her. Those were my gifts to her and she, gentle lover, taught me how to suffer and to laugh. She would say, let yourself be little, and I was.

Human strength arises through our vulnerability. It’s a queer concept, rarely learned by men. Some lessons come harder to one body than another. Women, less endowed with musculature, have better access to this. Perhaps women can be teachers if there are pupils in the room. My lioness lover was the recipient of aggression as a child. I learned of it from her nightmares. Asleep, she would begin whimpering. No, no, don’t, and end screaming in fear. Nights in sequence men would pursue her, beat her, chase her to the wall. I suppose we could blame her father who beat her with a belt and lashed her with sarcasm at her mother’s urging. Tired, drunk, it is not hard to abuse one more demanding child. I met them in their sober years. He, a small, tough retired plumber, would dress up like a clown for his grandchildren. She, crippled by a stroke, spewed hatred of her lot on all who would listen and yet she loved to laugh.

Together they had reared 10 children in the church. Parental humility was a gift not received in time for this child, this middle daughter born with a caul. Blessed, cursed, she struggled with the terrors of the night. Touching her arm as she slept, I would urge her, “don’t run, turn and tell them to let you be”. She would fight them and me as well.  Leave me alone, leave me alone. We would both end quivering for our own reasons. Once I almost lost her. She told me she was leaving me. Went home, drank three tumblers of cognac and called for help. I came. Enraged by terror, she destroyed her room and tried to climb out a high window. Heavier and desperate, I wrestled her to the floor and pinned her until she passed out. We wrestled most of our dreams to the floor, yet lost each other in the end. We were lovers and partners for four dramatic years before she died.

Now sometimes, I am glad she is dead. I would not want her to see our friends living with AIDS as we lived with leukemia. I would not want her to know the body’s failure to fight infection has spread to the world. I would not want her to read that the abuse of children has reached the point where Guatemalan niños are sold for 20,000 dollars U.S. for their internal organs. I would not want her to witness the spread of suffering. The year before her last, Pat became a carpenter. She lifted weights in preparation, ran extra laps around the track, practiced yoga to center. She joined the union as an apprentice. She enjoyed going in drag in a green hardhat, a tool belt, work boots. She started right off in heavy construction. She looked tough enough, smoking a cigarette, being one of the guys high up on the scaffolding, strapped to a beam, healthy, beloved, even serene. She climbed close to heaven.

When I think of her now, I miss her life. When friends make me laugh, my body remembers. Having learned from her of suffering, I am less attracted to pain. I prefer joy, deep, visceral, determinative joy. My friend Meg and I in a hollow on this Mendocino Highland attempt to light a candle. Backs to the wind, hands shivering, we use up 13 matches, but it is done. Giggling at what she would think, kneeling steadily, we watched the beeswax drip and burn. Even the wooden base catches fire. Anywhere two women can light a candle in the wind, Pat’s spirit will live.