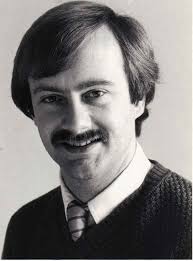 I knew Mark, admired him, loved him.  He was a Starr King student who did his internship at the First Unitarian Society in San Francisco in 1979-1980.  I was the supervising minister.  Mark was born a “PK” and a multigenerational Universalist.  He knew our UU history, and knew his way around church life.  I learned from him.

We worked as a team of ministers: Mark Belletini, Barbara Pescan, Mark DeWolfe, and I.  It was a magical year, still remembered as a high point by that congregation.  DeWolfe was young, brilliant, creative, energetic, handsome, compassionate, witty, verbal, and gay.  He once described himself as a “hurricane.”

Mark Belletini wrote:  “Mark was the most ‘alive’ person I knew at that time.  Alert, hilarious, passionate, fierce, brilliant, a maestro of languages, a true Canadian eventually, and a major theologian of Canadian Contextual Theology…  he was a pioneer there too! I have rarely loved someone as much as I loved him…”

Barbara Pescan wrote:  “I remember his encyclopedic capacity for ‘nuggets’ about Unitarian Universalist historical figures…  His wit, and his enjoyment of wit.  I can still call up and hear his hiccup of a laugh.  He was deeply kind.  It’s the laugh, and his expression of helpless pleasure at being so amused that I remember with my own joy.”

Mark studied theater at Tufts before preparing for ministry at Starr King.  After graduation, he was a summer minister at Toronto First Unitarian, and then was hired by the South Peel, Mississauga, Congregation.  He was the first openly gay minister in Canada.  He was accomplished in all the arts of ministry.  He supported the fledgling Canadian UU Historical Society.  He wrote the hymn text for, “Sing Out Praises for the Journey,” which we sang yesterday.  Mark became well-known in Toronto for running a very active support group for young men dying of AIDS.

In 1982, while he was serving in Missisauga, I invited him to guest preach in my congregation in Belmont, MA.  He delivered a moving sermon about living after his diagnosis with AIDS.  One point he made was that he would die in a world that was still marked by “racism, sexism, patriarchy, militarism, and homophobia.”  At first he was depressed about this, but then realized it was not his task alone to save the world — that each of us is part of a community that will carry on.

At that time the retrovirus had not been identified, and people were not sure if it could be transmitted like a cold, or through contact, or what.  My parishioners filed through the receiving line, deeply moved by hearing Mark, giving him hugs and handshakes and words of appreciation.  I loved them for their embrace of my beloved colleague.

In 1992 Mark’s congregation published a selection of his writings, titled Time to Live.  In the preface his parents wrote:  “He demonstrated a deep sensitivity to the feelings of others, a reverence for all living things, and a penetrating curiosity about the meaning of experience and relationships.”

His name was Mark Mosher DeWolfe.