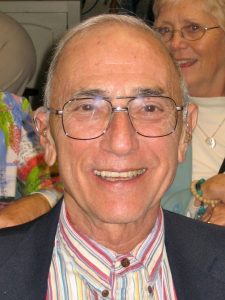 “Gene” Navias  was born on March 18, 1928 to devout Unitarians Dr. Louis Navias and Adelaide Gant Navias.  He graduated from St.  Lawrence University with a Bachelor of Arts in 1949 and from the Theological School of St. Lawrence with a Bachelor of Divinity in 1951.

He was ordained to the ministry by the First Unitarian Church of Cleveland, OH in 1951.  It was during that settlement that he “learned” he was gay, at the age of 23, but of course he remained closeted for fear of not only losing his job, but being drummed out of the ministry.  In a personal interview with his niece-by-marriage, Jennifer Hamlin Navias (who is a colleague of ours), he said “I tried to pass for straight, acting as butch as I could, but I must not have been at all convincing.  As a Unitarian, I went to the old May Meetings held yearly in Boston.  I cruised the watering spots and discovered my colleagues at the Napoleon and the Punch Bowl.  What a relief.  There was a little band of us, all living double lives.  We met, shared stories and gave one another needed support and advice on how to cope.  We were all we had and we needed one another.  We knew that the Unitarian Department of Ministry was death on gays.”

He was called to two other churches before serving as Religious Education Field Consultant to the UUA from 1963 to 1982, then Director of the Religious Education Department of the UUA from 1982 to 1993.  When he decided to apply for that position, he went to Gene Pickett, then UUA President, and said “There’s something you should know about me, and so I’m telling you that I’m gay.”  Pickett replied “Well, other people have told me that they think you’re coming out, but I’ve never heard it from you.”  Navias answered, “I think it’s important that you hear it from me,” and Gene Pickett responded, “Well, I can tell you that it doesn’t matter to me.”  In Navias’s words, “What an ally! That was extraordinary.”[1]

In 2001, he was chosen by his peers to give the 50-year address at Ministry Days.  On that occasion, he said “There was no way I could be openly gay in 1953.  The UUA shipped queers out fast… But I wanted to be a minister, and I hit the closet running.  I was actively uncelebate for 25 years until the liberation movement generated by Stonewall, the UUA resolutions were passed, and UUA President Gene Pickett affirmed my right to be me.”[2]

He served as associate minister to Arlington Street Church of Boston, MA after his service to the UUA, from 1993 to 1999.  When he received the Distinguished Service Award in 2005, he spoke about the Gay Pride March that had just happened in Boston, saying “At that moment, my hopes for the world began to be restored…  That this remnant could make its voice heard and make its voice for freedom and justice be heard.”[3]

Ever the religious educator, Gene was a huge proponent of LREDA.  All the way back in 1967, LREDA recognized the need for good sexuality education in our RE programs.  The first sexuality education program of the UUA was published in 1971.  In a published interview titled “How AYS Saved My Life,” of the topic then called “homosexuality,” he said, “[AYS] held that same-sex affection, attraction and expression are natural to human beings.  It championed the rights of gays and lesbians to fair and equal treatment in society and before the law.  AYS was a landmark program in its openness, its frankness, its keen sense of justice, and its explicit information, in regard to all the topics of sexuality, but especially in the area of homosexuality it led and still leads the way.”

He continued, “The program was wonderful for me.  As the person in charge of all the training and demonstration, I became liberalized and liberated myself.  ABOUT YOUR SEXUALITY helped me become comfortable with my own sexuality and that of others.  I believe that AYS has been important… for the liberalizing impact it has had on the whole UUA.  AYS produced a cadré of informed and liberated delegates who went to General Assemblies and voted support for gay and lesbian unions, for the Office of Gay and Lesbian Concerns, for gay and lesbian clergy, and all the rest.” [4]

Gene successfully united music with religious education.  He authored new lyrics to well-known tunes, such as “John Murray Sailed Over the Ocean,” as a way of teaching Unitarian Universalist history and theology.  He served on a team that studied the feasibility of the first Unitarian Universalist hymnal, and organized a program of narrations and hymns for the 1992 UUA General Assembly titled “Singing – Shouting – Celebrating:  200 Years of Universalism.”

He had a wide range of interests, and succeeded in many different areas of life.  Quite musical, he was an accomplished pianist and a tenor soloist.  He collected church music; his collection is now housed at Arlington Street Church.  Gene also enjoyed traveling, and with his partner, Jim, ventured to Austria, the Czech Republic, England, Mexico, and Spain.  Additionally, he was interested in antiquing; his mother was an avid antique collector, and she brought Gene along in her hunts.  When Gene entered adulthood, he developed his own interest in antiquing, and he soon couldn’t pass by an antique store without entering.

On a more personal note, his niece Jennifer recounts, “One of the first times I met Gene and his [first] partner Stan (at a family Thanksgiving gathering around 1995), I remember asking Gene how he and Stan had met.  He laughed in that way that he had, and with a glimmer in his eye said to me something along the lines of “You know… when you ask a gay man where he met his partner, you just never know what kind of an answer you will get.  It might not be family appropriate.” All at once, with that simple statement, he let me know that I had asked a question that was REALLY heteronormative, and that it was all right; he was willing to give me a little guidance.  There was not an ounce of defensiveness or anger in his answer and he let me know where I had stepped in it without leaving me feeling covered in crap.  Gene was a master at making people feel welcome.”[5]

Gene died on August 17, 2014 at the age of 86, leaving a generous bequest to UURMaPA, which we have used to enhance our endowment fund.

His niece Jennifer gets the last word here: “In my mind when I think about how a Universalist could best live out their faith of universal salvation and how all humans are worthy, I have only to think of Gene Navias.”

[1] From an interview conducted by Celeste DeRoche, May 19, 2009, currently housed at the Andover-Harvard Theological Library Archives and available only for personal research at this time (2/19).

[4] “How AYS Saved My Life,” provenance unknown; Sarah Gibb Milspaugh might know. I received it from Jennifer Navias.

Rev. Welles is a graduate of Starr King School for the Ministry in Berkeley, CA, where her studies overlapped with both Bill Sinkford and Tom Disrud.

Judy was born into the Unitarian Society of Wellesley Hills, a suburb of Boston. Her childhood in the church was profoundly influential in her decision to enter the ministry, though she didn't start seminary until age 47. Before that she worked as a mid-level administrator for a Planned Parenthood Chapter in southern California, and before that were too many part-time jobs to count! She has served on the Board of Trustees of Starr King School, and the Western Regional Subcommittee on Candidacy, which is part of the credentialing process for ministers. She has grandchildren in Brooklyn, NY.
Posts by Judy Welles