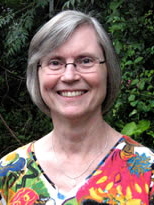 This sermon won Kathleen the Interweave sermon contest, and she delivered it again at the Interweave gathering at General Assembly in June 2000 (Nashville, TN).

The Unitarian Universalist Association has been on record since 1970 as supporting the rights and worth of gays, lesbian, and bisexual persons.  But as recently as 1987, we became painfully aware of a great deal of unexamined and hurtful homophobia within our congregations.  That’s why this congregation spent so much time trying to educate ourselves about homosexuality and our very real discomfort around this issue.  We continue to pay attention to this because we are pushing against conventional wisdom, which we absorbed from the day we were born.  I know I did.

Back in 1972, Sidney Abbott and Barbara Love wrote a book with a great title: Sappho Was a Right-On Woman.  From a book of quotations, I found this gem from that book:  “If Lesbians were purple, none would be admitted to respected places.  But if all Lesbians suddenly turned purple today, society would be surprised at the number of purple people in high places.”

Audre Lorde was a writer who died of cancer eight years ago.  Here’s how she described herself in 1983:

I was born Black, and a woman.  I am trying to become the strongest person I can become to live the life I have been given and to help effect change toward a liveable future for this earth and for my children.  As a Black, lesbian, feminist, socialist, poet, mother of two (including one boy), and a member of an interracial couple, I usually find myself part of some group in which the majority defines me as deviant, difficult, inferior or just plain “wrong.”

From my membership in all of these groups I have learned that oppression and the intolerance of difference come in all shapes and sexes and colors and sexualities; and that among those of us who share the goals of liberation and a workable future for our children, there can be no hierarchies of oppression.

“Oh,” says a voice from the Black community, “but being Black is NORMAL!” Well, I and many Black people of my age can remember grimly the days when it didn’t used to be!…

… so long as we are divided because of our particular identities, we cannot join together in effective political action.

Within the lesbian community I am Black, and within the Black community I am a lesbian.  Any attack against Black people is a lesbian and gay issue, because I and thousands of other Black women are part of the lesbian community.  Any attack against lesbians and gays is a Black issue, because thousands of lesbians and gay men are Black.  There is no hierarchy of oppression.

Oppression is a heavy load for any person or group.  We have felt it ourselves as a minority religious faith.  Our vision is to affirm and promote the inherent worth and dignity of every person.  This vision has played out most often in our work to treat groups of people as human beings, such as people of color, the mentally ill, immigrants, and people with disabilities.  Today we celebrate our progress in treating gay, lesbian, bisexual and transgender people as human beings.  Today we celebrate with our local University [Texas A&M], the fifteenth anniversary of its formal recognition of a gay and lesbian student group.

Throughout the coming week there will be events on and off campus to celebrate this particular kind of diversity.  A&M is not exactly the most diverse school in the world, but a lot of people are working to highlight the diversity that is there, and to normalize differences among us.  Recognition of a gay and lesbian student group did not come easily; in fact, it was state mandated.  Still, it was a major step forward in building community for a specific group of people.

Why is this important?

Individuals who are identified as part of an inferior group share common experiences.  If you are bald in a world that takes pride in beautiful hair, you have an instant bond with other people who are bald.  Nowadays some people shave their heads on purpose, sometimes to defy convention or to look distinctive or even to save time and shampoo!  But baldness and left-handedness, for example, do not typically lead to discrimination, hatred, and even violence.

An even stronger social convention is in the clothes we wear.  Men don’t wear dresses, do they?  Women don’t wear the so-called “pants in the family,” do they? When they do, they are subject to possible criticism at the very least and maybe even condemnation.  Tonight millions of people will tune in to the Academy Awards.  Beautiful, thin people will parade up to the stage dressed “to the nines” in their tuxedos and low-cut dresses and perfect makeup, while the rest of us poor slobs will look shabby by comparison.

When I was in grade school, I was not allowed to wear pants unless the temperature dipped well below freezing.  Today, infants are still dressed according to their sex, and I haven’t seen any of you guys in dresses and high heels!  But I’d be mighty surprised if you did.  My spouse tells me that a boy at First Unitarian Universalist Church wore dresses to church (but not to school) at least until the eighth grade.  People were more interested in his ideas and how he treated other people than in what he wore.

There is a danger in dividing people into groups because, it tends to ignore the range of personality and behavior within those groups.  Individuals who are hated because of their group identification can suffer alone or they can join with other members of the group.  They share their experiences of oppression and ways to resist oppression.  They share a struggle for survival.  They share the experience of community as a source of hope and understanding.

Audre Lorde was in so many minority categories she could be hated by just about anyone.  All of the categories helped define who she was and they also placed her in multiple circles where you and I might find ourselves, too.  For example, she and I were both born female and so were at least half of you and at least half of the world’s population.  But the only thing we all have in common is biological.  The way we express our femaleness is a function of gender expectation in the culture as well as our own unique personality and style.

My point is that gay, lesbian, bisexual and transgender people share some things in common, but THEY are a diverse collection of individuals, too.  Christine Smith shares my whiteness, my femaleness and my vocation.  She is ordained in the United Church of Christ.  But she is also a professor of preaching and worship at United Theological Seminary of the Twin Cities.  One of her books on preaching was assigned reading in my own preaching class.  She is also a lesbian.

Smith is interested in lifting up diverse voices that are still dominated by Euro-American voices in the world of preaching.  She sees this as an issue of justice.  Until we begin to hear different voices, we cannot hope to build bridges of understanding among us.  Speaking as a lesbian, Smith identifies three liberation movements within the wide range of the lesbian and gay community.

The first movement is for personal and social equal rights.  The idea is to integrate homosexuals into mainstream culture just as heterosexuals have come to expect.  The emphasis is on the sacred quality of each person.  Justice means treating everyone with equality.

The second movement is toward sexual liberation.  The primary issue is freedom of expression in every area of our relational and sexual lives.  Justice means treating people and their sexuality as inherently good.  I am reminded here of Holly Near’s song entitled “Simply Love.”  The lyrics begin, “Why does my love make you shift restless in your chair / and leave you in despair / It’s simply love — my love for a woman.”  She makes the point that it is war and hatred that should rouse our indignation, not affection and love.

The third liberation movement for gays and lesbians is a movement toward radical social and religious transformation.  The idea is to challenge our heterosexist social system, culture, and theology and to challenge our idea about appropriate roles for men and women.  Justice means freedom from gender constraints.

You may or may not identify with any of these three movements:  equal rights, sexual liberation, or radical change.  But all of us are affected by progress in these areas as well as the backlash against it.  There seems to be a bi-coastal battle for legal recognition of same sex marriage.  I, for one, want to encourage long term commitment between loving adults.

On a local level, I have a dream that friendship, affection, and love for another will be a cause for celebration.  As the Rev. Mark Belletini puts it, “Let love change everything:  ordinary daily bread into the bread of life, need into abundance, friendship into communion, and fear into praise.”  Parents love their children of either sex.  Brothers and sisters love each other — or don’t — because of their personality, not their sex.

And what about us, now that we have been formally recognized as a Welcoming Congregation? By way of partial response, let me share one story told by the Rev.  John Thornburg, pastor at Northaven United Methodist Church in Dallas.  It was Mother’s Day, and prayers were offered for mothers, for women without children, and for mothers who have not been a source of strength for their children.

When this last prayer was offered, three women turned in their seats and gently placed their hands on one young man seated nearby who was weeping quietly.  It seems that a few months before, in some measure because his church family affirmed him both as a child of God and as a gay man, he had come out to his parents.  They cut him out of their lives instantly and took such actions as returning, unopened, his letters and Christmas gifts.  The church then became his spiritual refuge in the depth of his sorrow and pain.

So long as good people are condemned for who they are as human beings, we must offer refuge.

So long as religion is used as a tool for hatred, we must offer refuge.

Though we welcome all people who share our approach to religion, our special welcome to socially marginalized and hated people is right and just.  Songwriter Fred Small wrote a song to a child called “Everything Possible.”  The chorus goes like this:

You can be anybody you want to be
You can love whomever you will
You can travel any country where your heart leads
And know I will love you still
You can live by yourself, you can gather friends around
You can choose one special one
And the only measure of your words and your deeds
Will be the love you leave behind when you’re done.

May our words and our deeds be signs of love and justice.