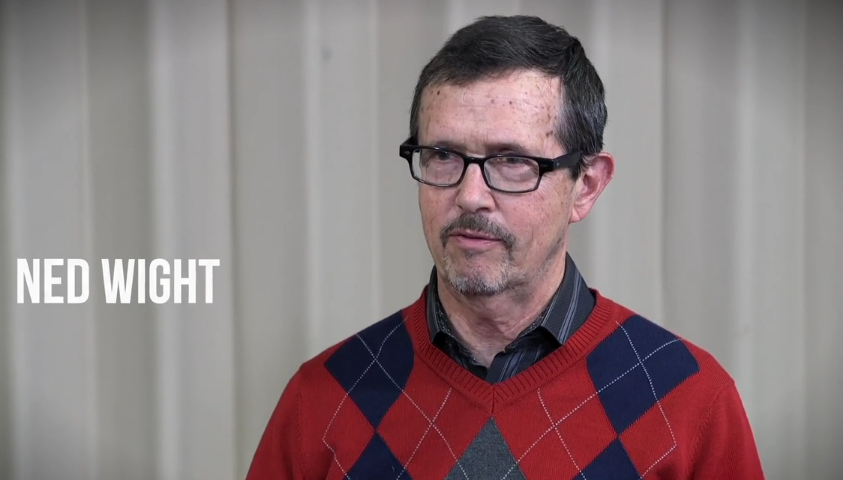 I think I’ll talk about two parts of my ministerial formation and the settlement process as an extension minister. SI was part of the extension ministry program, and this would be in the late 80s and early 90s. And I’ll start with a story of my coming out, which was part of an internship that I had at First Parish in Belmont, Massachusetts with Diane Miller as the senior minister for that congregation. And I had been there for a year and a half or so in 1989 and 1990, and in October of 1990 I had a preaching opportunity, and I was active in the group that was trying to decide about the welcoming, doing the welcoming congregation, to make the congregation open and affirming for lesbian, gay, bisexual people, and was active in that group. And I had not come out to the congregation or anyone in the congregation, and I thought, “This seems both hypocritical and exceedingly awkward.”

And it just seemed wrong to me. Now, I’d had some conversations, as you might expect, with people through seminary because I was still at Harvard Divinity School, or through conversations with people from the settlement office or the student office about, do you disclose or not disclose that you’re gay when you’re going into the search process? And do you disclose or not disclose when you’re going into an internship? And the conventional wisdom at that time was that it’s probably better not to disclose because you never know what negative consequences you might have, and you might keep your options open by keeping your sexual orientation secret. And it seemed, the more I thought about it and the more I thought about it, particularly in the context of working with a welcoming congregation program, in the congregation, the more absurd that just seemed.

And having established rapport with this congregation over, this was my, I think the second year of my internship, it just seemed ridiculous for me not to be open with them. And so I preached that in October of 1990, and Diane Miller last night at our conference here shared with me a vignette about two of the older members of the congregation about that very sermon, which I had not heard myself, but I thought it was interesting. I’m a person who has always looked a little bit younger than my actual age. And so in the sermon, I disclose that number one that I was 40 years old and number two that I was gay. And at the conclusion of the service, somebody who was observing these two women said that they, as I had gone to the back of the congregation, they turned and looked to each other and said, “I can’t believe it. I had no idea he was 40 years old.”

I think what’s really instructive about, and the, I have to say that the response on the part of the congregation was…I think it was so, it was cathartic for people for a whole range of issues where people had felt that they had been silenced. I entitled the sermon “Conspiracy of Silence” and it created a context for people to be self-disclosing in ways, over the next several months, that I think was pretty, pretty liberating.
This little funny story about the “I didn’t know he was that old, shocked to find that he’s 40”, I think illustrates one of the learnings from particularly a situation where you are projecting how other people are going to react to something or how people make sense of it or how people judge it. That those projections are often, are misaligned with the reality of the way people are actually looking at the world and that the surprising thing should have something to do with age and nothing to do with sexual orientation is just…On the one hand it’s sort of, Oh my God, how could I miss that? But on the other hand, it’s how tragic and sad that the assumptions that we make about realities that we think we’re…That people are not going to be able to deal with, and that we shield ourselves, often protect ourselves from that when needlessly, and create prisons of our own manufacture. It’s just really tragic and unfortunate.

The second part of this saga, so I decided after this internship was over, and I actually had a year, an extra year with this congregation because Diane decided that she was going to go off and do something on her own, and I had an opportunity to serve as acting senior minister for the congregation for a year immediately after my internship. And then during that year, I decided that the next step for me would be to enter the extension ministry program, which was funded by the U U Veatch Program at Shelter Rock that was putting money together to support ministers in startup congregations and young congregations and pay for a certain part of their salary for the first year and a lesser part the second and third.

It was a sort of an opportunity for congregations to experience professional ministry of leadership and in a way that would be affordable for them as they built up more capacity to support a minister on their own. I entered this program and it was a matter of matchmaking on the part of the program more than doing a full search. And the congregation that they selected for me to, they thought would be a good match was Summit Unitarian Universalist Fellowship in, at that time in La Mesa, California, which was a suburb of San Diego. And I went out there and spent a whirlwind week preaching. I think I preached…I’m trying to remember if I preached the first Sunday. I think it was a matter of having meetings with people most of the week and then preaching twice on the weekend.

But it was a thorough grilling, and it was really at that time that I realized that there were, I represented two “Gs” for them. As a theist, I represented God as a “G” and as a person who was gay, I represented the gay as a “G” and it became immediately apparent during that first week that being, that the God “G” was of much greater concern and provoked a lot more anxiety for them than the gay “G.” And so part of the value of learning that early on is that it became possible for us to work on some significant listening programs within the congregation to have people be able to articulate their theological perceptions of the universe and to listen to one another and to determine whether or not we wanted to be the kind of congregation which I wanted us to be.

That was a very large tent for people to hold a wide variety of theological views, which was I think one of the strengths of our religious movement. We actually spent, I would say the first three years of my 13 years of ministry there working diligently on, I think eliminating, reducing some of the reactivity that people had about God language and opening up to a little less reactivity about that. I would say that it was for some people more successful than other people. And I think in our movement, that’s probably true as a whole, that there’s still some anxiety about people holding maybe more traditional theistic views, more traditional adherence to Christianity, and it is my hope, based on my experience of the experience of others in our movement, that we will continue to advocate for our being a very big tent and a very open place for people to hold a wide variety of theological positions.

Rev. Ned Wight retired in August 2019 from his position as Interim Senior Minister of the Unitarian Universalist Congregation at Shelter Rock in Manhasset, New York. Prior to that, he served for a decade as Executive Director of the same congregation’s UU Veatch Program, which makes grants to social change organizations around the country. He has also served UU congregations in California and Massachusetts. He holds degrees from Harvard Divinity School, Boston University and Stanford University. He currently chairs the board of the Unitarian Universalist Service Committee, partnering with grassroots organizations to champion human rights at home and abroad.
Posts by Ned Wight