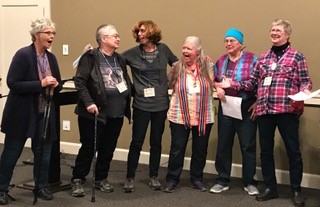 “Wisdom Has Built Herself a House,” read the house banner that stood behind all the stirring presentations at this historical event—a convocation of 55 attendees buoyed even more by 20 additional folks for the main day of programming.  Opportunities abounded to share stories and connect in both ongoing and new relationships of meaning, as was true at our previous gathering near San Antonio, TX, in February—the first of this two-part series honoring the 50th anniversary year of the Stonewall Uprising through a UU lens.

Also like the previous event, most of the conference presentations were captured by a professional videographer, for archival purposes and as material to support the publication of a book, the newly selected editor of which, Diana McLean (settled minister at the Peterborough, NH, UU Church), was introduced.

Learning our way around a new site for the first time in 25 autumns, we first touched base personally in small groups and then, led by Russ Savage, we honored 18 recently deceased colleagues and partners, including Hugo Holleroth, Gretchen & Ray Manker, Ed Searl, David A. Johnson, Judith Walker-Riggs, Carolyn Colbert, Erinn Melby, Dorothy Emerson, and Clark Olsen.

In the morning we began a very full day of activity with inspiring and illuminating chronicles by two significant players who influenced the unfolding of UUA leadership in this arena.

First keynoter Jay Deacon recounted his evolution in ministry from Presbyterian to Assembly of God into the Metropolitan Community Church, in the Northeast and Chicago, and then a transfer to UUism in the early 1970s.  He served the UU Church in Bangor, ME, just after a beloved gay member was horribly murdered by a gang of high school students in 1984; the local paper declared that he “brought it on himself by his effeminate ways.”

(Some years later the same Bangor paper supported gay marriage, a development which, along with the recent election of Laurie Lightfoot as Chicago mayor, prompted Jay to suggest “The earth is indeed moving beneath us.”)

He then took a post leading the relatively new UUA Office of Lesbian and Gay Concerns (1986-89), which offered him the “privilege of sorting through files about early heroes” as he pioneered development of the Welcoming Congregation program.  “I believed we could move the center of gravity of debate,” so he assisted UUs who were especially active in Massachusetts (MA) statehouse issues—next door to the UUA, notably.

When Jay went on to serve at the Unitarian Society in Northampton, MA (2002-06), he refused to sign wedding licenses and was interviewed by a local newspaper reporter—Rachel Maddow! Overall he emphasized, “This is about evolution of consciousness and therefore of culture… a push toward greater possibility.”  (See his book, “Magnificent Journey: Religion as Lock on the Past or Engine for Evolution.)

Second keynoter Meg Riley (senior minister at the Church of the Larger Fellowship since 2010) expressed gratitude to UURMaPA and to those UUs who came before, noting that “On this issue, we have changed history.”  Meg arrived in 1991 as the fifth (but first full-time) Director of the UUA Office of Lesbian and Gay Concerns, humble about her learning curve, but in time to implement the Welcoming Congregation program.

She galvanized around outrageous right wing religious material and advocated with UUA President Bill Shultz that UUs need to get on this, that we “have the right spiritual authority to move the needle.”  At the time, religion was not the place to be, kind of the enemy for gender minorities, she recognized.  The American church generally was oppressive, but she was willing and eager to show a different religious approach

She was clear that a person-of-faith strategy would approach activism as more than just getting 51% of the vote (a purely political approach); it meant, for instance, looking to help heal rural areas (which were very divided), and it suggested fighting efforts to separate “special rights” from intrinsic rights.  Important to her own journey was an early orientation toward what became known as intersectionality.

Meg had many opportunities to show up in visible ways, encouraging other leadership to do so as well, especially as she took on a primary role at the UUA Washington Office.  A turning point was when the UUA Board came to Washington, DC, in support of a protest rally for gay rights, and when identified they got a standing ovation, which, Meg noticed, resonated visibly thru their bodies.  They got it: This really matters!

The advocacy for gay marriage had early UUA support, and she described a significant strategy shift from individual prejudice reduction to challenging institutions.  She observed that people and congregations that had “done the work” (largely through the Welcoming Congregation program) were much more able to move with gay marriage activism.

She loved that a large banner on the side of the UUA building facing the MA State House declared, “Civil Marriage is a Civil Right,” which got the unhappy attention of the MA Historical Society.  They complained to the UUA facilities manager, who responded, “We’d like to take it down, but the person in charge of that is on vacation.”  At the time, MA Democrats considering inclusive marriage rights met in the UUA chapel for safety.  And Beacon Press was a pivotal support!

Meanwhile, Meg appreciated that on the West Coast in 2004, Lindi Ramsden and the UU Legislative Ministry of CA began organizing UU engagement on behalf of marriage equality, utilizing the hymn “Standing on the Side of Love” as a spiritual touchstone for their work. By 2008, they were responsible for coordinating not only UUs, but statewide interfaith organizing.  Soon thereafter, the UUA launched a more broadly intersectional campaign, now known as “Side With Love,” of which Meg was the founding Director.

She noted that “It’s so much about relationships,” even though that can be dicey.  For instance, UUs teamed with Mormons on immigration justice, but in doing so, tried to avoid mentioning gay issues, which Meg cited as a profound and regretful mistake.  She acknowledged that they were “failing forward” and “redefining success” all the time.

Then the first panel of ministers and partners featured Brendan Hadash, Kim Crawford-Harvie, Tony Larson and Pat Sullivan.  Kim reflected on one angle she tries to manifest during hard times:  “Even if (AIDS) takes every one of us and there’s no one left to tell the stories, it matters that we love each other well.”  Panel stories and reflections were personal and powerful portrayals of moments and evolutions, sometimes humorous, sometimes sad and/or distressing, all very meaningful.

UURMaPA Board members then repeated a program from the February conference: “Remembering LBGTQIA Pioneers,” in which presentations of researched but all-too-short biographies honored trailblazers no longer among us.  We sadly added Dorothy Emerson to this list.

And the evening Odyssey from Mark Belletini capped an intensely enriching day.  His impassioned portrayal described many good people who have animated and continue to animate his life, illustrated by multiple tables and wall panels of pictures and memorabilia.

The next day opened with a moving worship service led by Jane Dwinell, followed by a second panel, featuring Lucy Hitchcock, Carlton Elliott Smith, Lindi Ramsden and Craig Matheus, all of whom spoke from their hearts about living in the midst of this evolution.  (Lindi “Zoomed” in live from California on screen, largely because she resists increasing her carbon footprint through plane travel.)  Multiple testimonials described how UUA staff were more readily supportive than large chunks of congregations.  “All those open doors were not as open as they seemed from the outside,” noted Carlton.

Then we had time with Michael Crumpler, current director of the UUA’s LGBTQ and Multicultural Programs.  He emphasized that changing minds changes policy as he explained and promoted the latest edition of the Welcoming Congregations program.  We are actively trying to “reframe our gender paradigm,” he declared.

After lunch, folks could participate in a variety of optional activities, including an informative session with Keith Kron (former Director of the UUA Office of Bisexual, Gay, Lesbian and Transgender Concerns; current director of the UUA Transitions Office).  Private filming of individual stories went on nearby nearly all afternoon, moving the hired videographer (a non-UU hetero male) to tears.  “These stories need to be heard,” he affirmed.

Throughout the conference, an emerging Timeline—begun at the previous event in February and well curated by UURMaPA Historian Susan LaMar—hung in many sheets on a wall, lifting up key and personal moments during the 50 years since Stonewall.  More notes were added as people engaged with this dynamic chronicle.

The evening offered homegrown entertainment in another “Wide Variety Show” that was heartwarming and great fun, emceed by Barbara ten Hove.  It ended with a rousing rendition of “The UUs Who Never Adjourned” (a parody written in 1989 by colleagues Ken Read Brown and Robbie Walsh, sung to the tune of “Charlie on the MTA”).

The final morning had two more group activities, first an update on and discussion of current UURMaPA and UUMA activities, with our President Diane Miller and UUMA Director of Education Darrick Jackson, who attended the full conference.  He was helpfully engaging and reflected the experience of fellow UUMA staffers Melissa Carvill Ziemer and Janette Lallier (who both attended the one-day option), when he commented afterward that this week’s experience “opened my eyes about the Rainbow History Project, and helped me understand the full lifespan of ministry, the need for retired ministers to share their journeys to be part of what we’re doing now.”

We closed with a worship service led by Meg Riley, who proclaimed, “Our memories here are so thick!  It’s in relationship that we are transformed.”  We then shared moments and people instrumental to us at pivotal times when the axis of our work shifted.  She also invited an inner circle community to sing “How Could Anyone” to each other and then to the outer circle, which brought some to tears.

Throughout the days and hours together, this conference elevated and captivated many of us.  We felt honored to both be a part of the event and to be able to honor five decades of struggle and advance, embodied by those who have served among and with us, before and still.