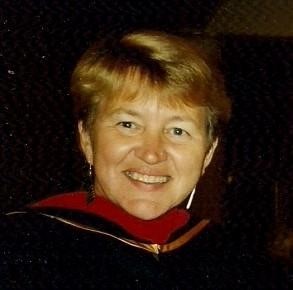 It is my honor to share with you a little about Rev. Rosemarie Carnarius.  I’m sorry that I never had a chance to know her, but I think of us as kindred spirits since we were born in the same year, 1938.  She was born on November 27 of that year in Leipzig, Germany.  She died October 10, 2015, in Tucson, Arizona.  She was on this earth for 76 years.

Rosemarie grew up as a wartime child in what would become East Germany after 1945.  She lived under Fascism and then under Communism.  No wonder she developed an early and passionate commitment to human rights, self-determination, and peace with justice.

She was politically jeopardized by her own anti-Communist activity while still a teenager.  At 17, knowing that her very life depended on it, she escaped one early August morning to Stuttgart, West Germany.  Unbelievably, she returned over the next two years for two brief visits with her ailing mother, ending with a wild ride through Leipzig with a truckload of soldiers in pursuit.  A suddenly appearing streetcar blocked the large truck but allowed the smaller, faster car and its passengers to proceed.

A few years later she married Roderick Carnarius, and they came to the United States in 1960.  They raised their two children in Bucks County, Pennsylvania.  Eventually she became active in the UU congregation of Trenton, New Jersey.

In 1984, with her children grown, her marriage ended in divorce.  She moved to the American Southwest, the beauty of which had long captured her imagination.  She soon involved herself in the life of the UU Church of Tucson, and there her gifts were quickly recognized.  She was invited to preach, and then she served as the Director of Religious Education.  After people kept asking why she wasn’t a minister, eventually she went to study at Starr King School, earning her M.Div.  in  1991.

Rosemarie was ordained by the Unitarian Church of the Monterey Peninsula in Carmel, California, in 1992.  In September of that year, at the invitation of the German Unitarians, she embarked on an emotion-filled return as a minister and goodwill ambassador to the country of her birth.  She spent two months traveling through a now reunited Germany and preaching at over 40 churches.  She said of this experience later that it “was one of the most important and vibrant ministries of my life.  I realized during those travels how much I treasure being an emissary of the heart and a participant in international and interfaith dialogue.”

Back in the U.S., she served an interim ministry to the UU Church of Cheyenne, Wyoming, in 1993-94 and was then called to the UU Church of Las Cruces, New Mexico, where she served 1994-96.  It was there that she met Aston Bloom, who would become her soul mate and life partner for the last two decades of her life.  When I spoke with some colleagues who had been at Starr King School at the same time as Rosemarie, they spoke highly of her but were surprised to hear that we intended to include Rosemarie among the ministers we planned to honor as Stonewall pioneers.  The Starr Kingers said they did not know that Rosemarie was a lesbian.

This fall I had a wonderful phone conversation with Aston Bloom, and I asked her about this.  Frankly, I was wondering whether Rosemarie was in the closet, and truly not a pioneer.  But Aston assured me that after their partnership began in Tucson in 1997, everyone at the Tucson church knew that Rosemarie and Aston were partners.  To honor the significance of her relationship with Aston, Rosemarie published her books under the name “Partnership Publishing.”

As it happened, multiple complications from unsuccessful hip surgery in 1997 reduced Rosemarie’s mobility and disrupted her life.  They did not crush her spirit, however.  Many years earlier she had come to see writing as central to her mission in life.  Despite excruciating pain, she continued to write.  Ten books are her legacy:  five non-fiction books on the need for personal and societal transformation, highlighting such issues as universal human rights, the environment, international relations, materialism, militarism, and, above all, peace with justice in the Middle East.  Her other five books contain her poetry celebrating life, love, nature and beauty.

Rosemarie moved back to Tucson with Aston in 1998.  Rosemarie served as Minister in Association at the Tucson church 1999-2002 and was able to assume limited professional work.  After 9/11, she started a dialogue group called “Inside Out,” which focused on the Middle East.  The group met for 11 years in the home she and Aston shared.  She was a prolific letter writer to both government officials and editors.  Even her forced confinement to bed in 2014 did not stop her speaking up and out on social and political issues.

A couple of years after Rosemarie’s death, Rep.  Pamela Powers Hannley wrote an article in the Arizona Daily Star about a book by Rosemarie called Envisioning a New World in which Rosemarie proposed consciously balancing yin (responsibility) and yang (liberty) in public policy.  She was writing about this country when it was new, when the Declaration of Independence was new, and Rep. Hannley lifted up Rosemarie’s particular attention to balance.  Her message seems to me just as apt today.  She wrote of “two values essential for a vibrant and congenial community: liberty and responsibility, I and We.”

I close with words from the booklet given to people who attended Rosemarie’s Celebration of Life.  This booklet turned out to be a wonderful source of information for me, as well as containing a beautiful collection of pictures.  “The way Rosemarie lived her life and walked this earth can teach us much.  It can show us how to be a more self-aware, inquisitive, appreciative person; how to remain true to oneself and one’s calling; how to seize the day with passion and perseverance, living fully and courageously despite setbacks and losses.  We celebrate her resourceful, adaptable, vigorous, and ever-creative spirit and give thanks for the energy and integrity with which she blessed lives and enriched our world.”

Barbara Child retired from full-time Unitarian Universalist ministry in 2010; most of her parish ministry work was in interim ministry. She served the UUA on both the Commission on Social Witness and the Commission on Appraisal, both of which she chaired. Before attending Starr King School in 1993-96, she had led two other professional lives, first teaching English at Kent State University and then practicing poverty law and teaching and administering writing programs.  It was during her years in academia, before she became active as a UU, that she gradually began to receive her own education about gender and sexual orientation.
Posts by Barbara Child