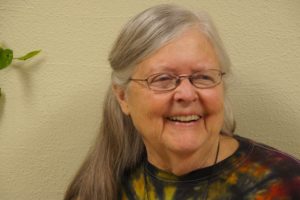 When Dorothy Emerson launched her life as an adult, it was with an awareness of her identity as someone who had a mission in life.  She long felt called to some vocation involving religion because those who inspired her most were ministers.

The privilege she recognized in her early life gave her a call to help others, an awareness that grew as she came to understand how a person’s body of work both influenced and was influenced by culture change.  These ideas were foundational for her own life’s work.[1]

Coming out and into Unitarian Universalism in Austin, Texas, Dorothy went to the 1983 General Assembly in Vancouver, BC, where she felt shocked to find no mention of lesbians at the Women’s Federation biennial.

She recalled, “A straight friend, musician/song writer Carolyn McDade, and I organized a spontaneous workshop we called ‘The Lesbians Among Us and the Lesbian Within Us.’  Quite a few women participated, partly because Carolyn was well-known for her music ministry to women.  The group concluded that UUWF needed to develop a program to address homophobia, provide visibility, and encourage acceptance of lesbians in local congregations, especially in women’s groups.  A curriculum writer was hired and I served as a consultant, but I don’t think the curriculum was ever finished or published.”

That launched Dorothy’s collaborative leadership in opening doors to culture change among us, facing down patriarchal assumptions, heterosexual norms and exclusion of the queer community, as well as broadening her work into anti-racism and classism awareness in the UU movement.

At the 1984 GA, Dorothy said, “I encountered the UU Gay Caucus, a group of primarily gay men.  At this point in the wider gay movement, lesbians were often invisible.  In 1977, the GA had passed the Women and Religion resolution, calling for all UUs to address the roots of sex-role stereotypes in religion, to change sexist ideas and language, and to establish equity for women in ministry and lay leadership.  …The process of implementing this culture-changing resolution had not yet penetrated the early UU gay movement.”

That year, GA affirmed services of union for same sex couples, showing Dorothy “an unanticipated response that delighted us lesbians.  That evening at the scheduled dance, for the first time at GA, same sex couples danced together.  We got a few uncomfortable glances from some folks, but by and large it was a joyous occasion, the beginning of significant culture change in the UU faith community.”

A graduate of Harvard Divinity School with a Doctor of Ministry from Andover Newton, Dorothy has colored our UU rainbow by initiating lesbian leadership in the UU Gay Caucus beginning with the 1985 Convo, by becoming treasurer of the secretive Lambda Ministers Guild about that same year and organizing a meeting at Unity Temple in Chicago.  She participated in the early foundations of what became the Welcoming Congregation program culminating in the 1989 resolution and curriculum.

Donna Clifford, Dorothy’s spouse, and she participated in SMUUGLE, Southeast Massachusetts UU Gays, Lesbians, Etc.  Candidating as an openly lesbian minister since 1988 made her search challenging, as congregations told her they wanted a minister who “shared their values.”  So she founded the UU Women’s Heritage Society and joined the Black Concerns Working Group and the first district Anti-Racism Transformation Team.

With the Rev. Dee Graham and the Rev. Gene Navias, Dorothy co-created and facilitated “Becoming a Welcoming Religious Education Program” for the 1999 fall conference of the Liberal Religious Educators Association.  The following year LREDA became the first UU Welcoming Organization.

Beyond her resumé of contributions, which you can read elsewhere, what truly makes Dorothy Emerson a clergy pioneer of the rainbow comes from her recognition of lesbian culture as a real entity, a pivotal force of community that has the power to strengthen and further bind the ties of LOVE that drive Unitarian Universalism.

For that, she embraced and promoted all of the cultures of the rainbow — gay, bisexual, transgender and gender fluidity and more; disabilities; racial identity; financial and class status — embodying new awareness with the work of inclusion.

And then she looked deeper, spearheading denominational work that she intended would build a more just faith community with the prayer of service for making ours a better, more meaningful world.

Even in retirement, she stepped into this Rainbow Project with fervor and precision, an attention to detail that lives beyond her, as we gather today to continue the culture change that has only just begun.

The Rev. Dee Graham is the Consulting Minister of Manatee Unitarian Universalists Fellowship. A life-long resident of Manatee County, and a published author and journalist, Rev. Graham’s ministry is entrepreneurial in style with a special mission to serve the increasingly aging lesbian, gay, bisexual, transgendered and queer families of the Gulf coast and Tampa Bay area
Posts by Dee Graham