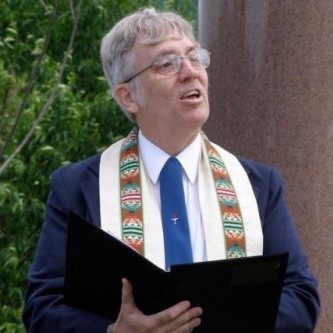 In January 1982, I began my extension ministry in North Hatley, Quebec, and West Burke and Derby Line, Vermont.  I considered myself in the closet with the door open.  If anyone asked, I promised to myself that I would speak honestly and openly.  This is the most conservative part of Vermont, so I was discreet.  The only “gay” activity I did at the church was running a monthly potluck for gay men.  In 1983, Alan (now my husband), came to the potluck and we have been together for 36 years.  We attended the 1984 General Assembly where civil unions were approved.  I was so proud of my denomination.  Alan and I immediately asked Rev.  Deane Starr, our district executive, to perform our ceremony.

On March 31, 1985 we were the first gay male couple in Vermont to have a wedding officially sanctioned by a denomination.  We tried to keep the ceremony secret, but word got out.  Someone in the church complained to the District Executive, but since he had performed the ceremony he explained that this was denominational policy.  The wedding did not seem to affect my ministry in any substantial way.

In June 1986, my extension ministry ended successfully and I entered the search process.  In those days many UU congregations would not call a gay minister and with a male spouse, being gay was impossible to conceal.  Eventually I left the ministry because after over a year of searching, there were no prospects.

In 1994, someone from the St.  Johnsbury church (with only 3 members), knowing that I had been an ordained UU minister, contacted me and asked if there was anything I could do to save the church.  I eventually was called as their minister.

About this time I became active in the struggle for gay marriage.  In 1995 the local (extremely conservative) newspaper asked to interview me about my activism.  After a short internal struggle, I remembered that being in the closet with the door open meant that I would answer any questions openly.  On May 31, 1995 there was a full page spread in the paper with pictures.  This time being openly gay became an asset, as several gays and lesbians joined the church.

When the Vermont Freedom to Marry Task force needed an amicus brief from religious leaders in Vermont supporting the right to marry, I helped organize VOWS (Vermont Organization for Weddings of the Same Gender).  This organization eventually included 42 religious leaders from 6 denominations, including all the UU ministers in Vermont.  Many UUs helped work toward civil unions and same sex marriage.

Right after Civil Unions were passed, Alan and I were wed on July 5, 2000.  I am pretty sure I am the first gay minister to be legally wed in the U.S.  Of course, when gay marriage became legal, Alan and I got married for the third time.

When I started my ministry as a closeted gay man in 1982, never in my wildest dreams did I think I would be legally married.  I am proud of the small role I played and my denomination played in making that possible.